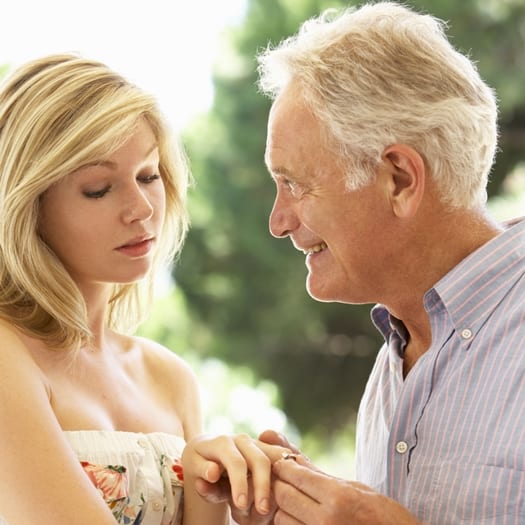 No Emotional Requirement: Men and The Playboy Culture

On a daily basis, we see stories pop up in the news about high powered older men engaging in illicit sex scandals with younger women. In fact, an entire book could probably be written about the reasons why we continue to see this phenomenon in our culture. As you can imagine, this scenario is sometimes a sign of sex addiction; however, whether sex addiction is present or not, there are a couple of other factors that tend to play in these scenario.

One of the reasons that we continue to see this scenario is what I refer to as the Playboy Culture. For years, American culture has reinforced that idea that an older man with a young attractive woman on his arm is a status symbol. The Hugh Hefner/Playboy Bunny phenomenon is only one way in which it has been modeled in our culture; but, I use this analogy because nine times out of ten clients in treatment say that Playboy magazines were their first exposure to pornography.

What we know about the way a person’s sexual template develops is that the images that are a part of their first exposure to sexuality impact their template from there on out. That does not mean that this model of behavior is acceptable or okay, but with a lack of sex education and a culture that supports this image, we see this behavior continue.

When we work with clients who have experienced the consequences of this type of situation, they often tell us that it was about power. They report feeling powerful in their ability to charm and seduce these young women, and the more women that they could “acquire” the better.

You might be wondering why a high-powered executive would need more power. We all know that power can be a very driving force, and some people with certain personality types just can’t get enough. In fact, sex addicts often report that the high of seducing a woman is more powerful than the sex itself.

They often report having sex out of guilt for having seduced the woman. The power differential that exists here is mainly that of age, but it can also include a differential in emotional and financial resources. The conquest for more and more women over time can become insatiable. It, of course, often leads to the development of a sex addiction and significant negative consequences.

Oftentimes, men who are in high powered positions where they have to make major decisions and express intense emotions, use sex with escorts and prostitutes as a way to de-stress without any emotional attachment. One of the reasons clients often give for this is that engaging in sex with a younger woman who simply wants to be paid for her sexual services does not require a lot of emotional energy. For many business executives, they do not even have to get out of their business mindset and can compartmentalize this as simply an exchange – again taking the requirement for emotional engagement out of it.

Overall, individuals who engage in these types of patterns often have a strong fear of intimacy that underlies this behavior. Encompassed in this fear of intimacy is usually either a fear of abandonment or enmeshment/engulfment.

Engaging with someone younger, perhaps less emotionally mature, and less financially resourced lowers the potential for them to either be abandoned or become too entwined in the relationship… Also, if the behaviors are done in secret (which they usually are), then the intensity individuals feel from engaging in these behaviors can be confused for intimacy. When this happens, a love addicted cycle usually begins which is often times ends up with the individual getting caught and feeling out of control.

Fortunately, at Gentle Path at The Meadows, we can help clients begin to understand these patterns and their origins, and how to get their intimacy needs met in a healthier way-a way in which they are operating from a place of integrity that is respectful to both themselves and others.